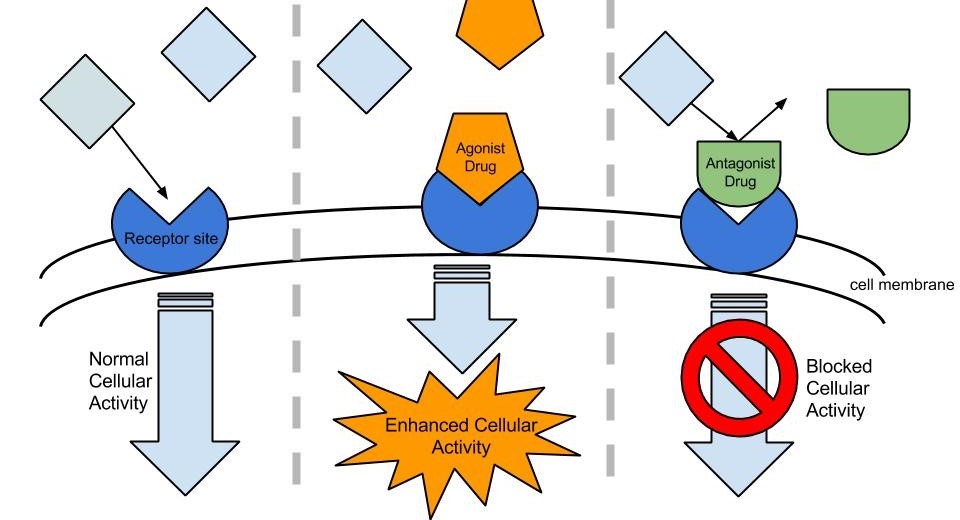 Opioids produce their biological effects by binding to opioid receptors. Depending on the opioid concerned, the biological effect can be activated or deactivated. Safe opioid management demands a basic understanding of these processes.

These molecules produce the maximum biological response when they bind to their receptor. Most opioids are full agonists including codeine, morphine, diamorphine, oxycodone, hydromorphone, fentanyl, alfentanil and methadone.

When these molecules bind to the receptor, the biological effect is less than maximal, even when all receptors are occupied. At low doses, the effects of full and partial agonists are similar. However, partial agonists reach a plateau of biological effect at lower doses than their full agonist counterparts. Unfortunately, adverse effects may continue to increase with increasing dose, even when maximal beneficial effect is reached. Tramadol, buprenorphine and pentazocine are partial opioid agonists.

When these molecules bind to a recepetor they block the biological response. Naloxone (Narcan) and naltrexone (ReVia) are opioid antagonists. Naloxegol is a peripherally-acting opioid antagonist, which selectively binds to mu-opioid receptors in the gastro-intestinal tract. It does not cross the blood-brain barrier, so does not antagonise analgesia and other central effects of opioids.

It is also important to understand that opioids vary in terms of the strength with which they bind to their receptors. A molecule with a low binding affinity will be displaced by one whose affinity for the same receptor is higher. Because the opioid antagonists naloxone and naltrexone have higher binding affinity, they displace morphine (and other full agonists) from the mu opioid receptor. This is life-saving when the effect concerned is respiratory depression. However, the effect is non-selective and the analgesic effect is also reversed. For this reason, opioid antagonists should be given in small boluses. Intravenous and nasal spray preparations are available.

Buprenorphine has a higher binding affinity at the mu receptor than naloxone. Therefore reversal of this opioid – particularly if administered via the transdermal route – demands urgent and specialist attention.
© Newcastle University

Hi there! We hope you're enjoying our article: Opioid binding
This article is part of our course: Opioid analgesics: Treating Pain in People with Cancer