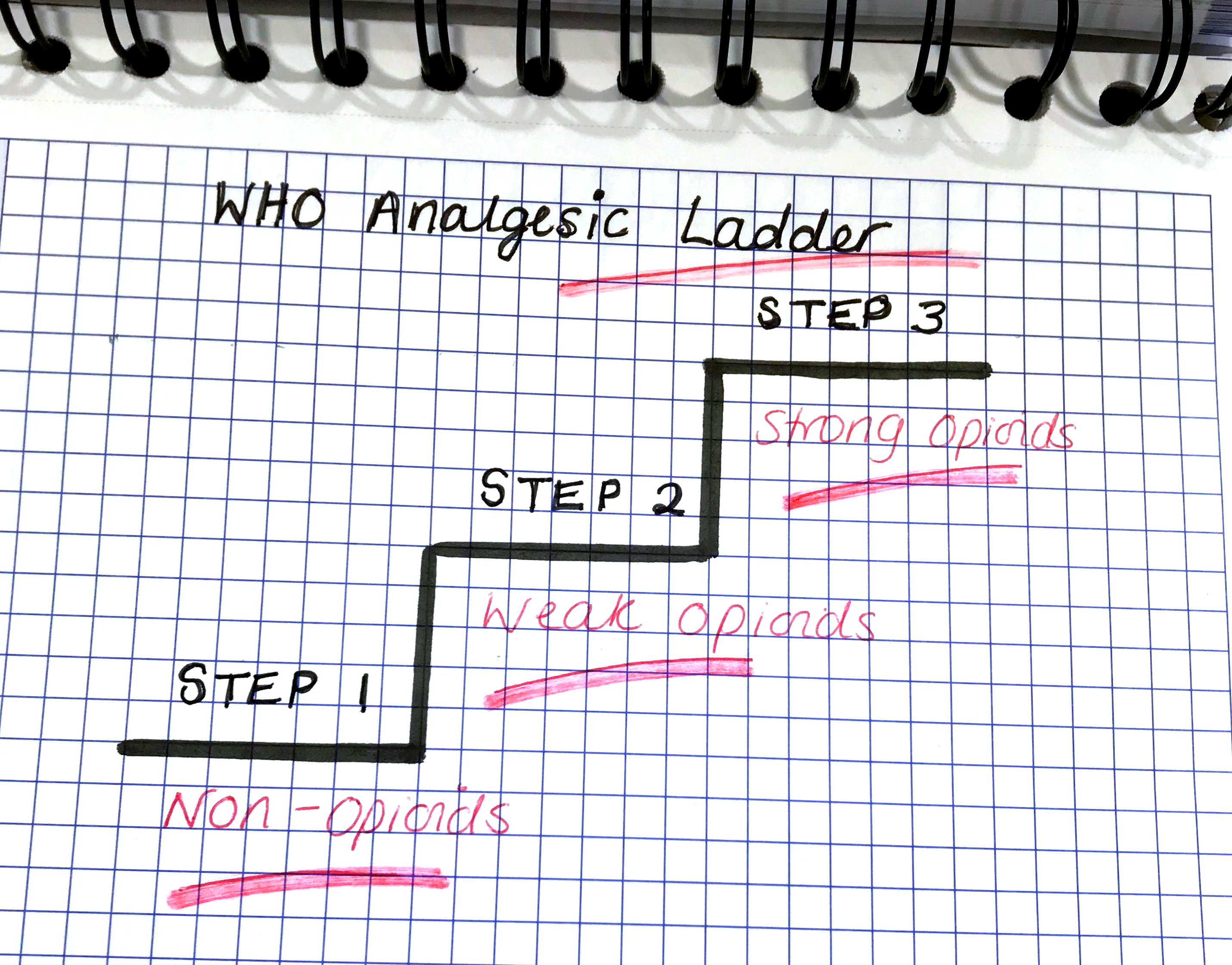 The World Health Organization (WHO) published the Analgesic Ladder for Cancer Pain in 1986 and it has since been translated into 22 languages. The simple, stepped approach was revolutionary because it legitimised the use of opioids for cancer pain.

The WHO analgesic ladder rests on 5 principles.

View Course
Note: The WHO analgesic ladder refers specifically to cancer pain and does not translate to chronic pain or neuropathic pain.The stepped approach to managing painful conditions is appropriate but the use of opioids for chronic pain in this way is not. Neuropathic pain is generally poorly or non-responsive to opioids. The risk of side-effects, tolerance, dependency and opioid-induced hyperalgesia outweighs benefits.

Step 1 of the WHO ladder is the prescribing of non-opioid analgesic drugs, such as paracetamol and non-steroidal anti-inflammatory drugs (NSAIDs). The latter may be effective if the pain has an inflammatory element but they have a ceiling effect, above which there is no additive benefit. Alternatively, the risks posed by these drugs may outweigh benefits.

If pain is not controlled by non-opioid analgesics, the patient moves to step 2 of the ladder and is prescribed a weak opioid, such as codeine. Codeine has a weak affinity for the Mu opioid receptor. Approximately 10% of codeine is metabolised to morphine, the latter accounting for the analgesic effect. Thus a patient who is taking a codeine-containing drug is not opioid naive and explains why the morphine equivalent dose must be taken into account when a patient moves to step 3. The amount of codeine metabolised to morphine varies between individuals.Note: Weak opioids exert the same side effects as strong opioids and sometimes more.
Tramadol, for example, can cause a serotonin syndrome, hypoglycaemia, hyponatraemia and seizures.

If pain is severe and not controlled on a weak opioid, there should be no hesitation in changing to strong opioid. In severe pain, it is reasonable to omit step 2 and commence a strong opioid. However, these patients are opioid naive and therefore need careful titration and monitoring.Strong opioids include morphine, diamorphine, oxycodone, fentanyl, hydromorphone, methadone. Morphine is the first-line drug of choice in controlling severe cancer pain. The starting dose should be lowered for elderly patients or in the presence of renal impairment.In the next step, we will discuss how you are using the WHO analgesic ladder.
© Newcastle University

Hi there! We hope you're enjoying our article: WHO analgesic ladder
This article is part of our course: Opioid analgesics: Treating Pain in People with Cancer