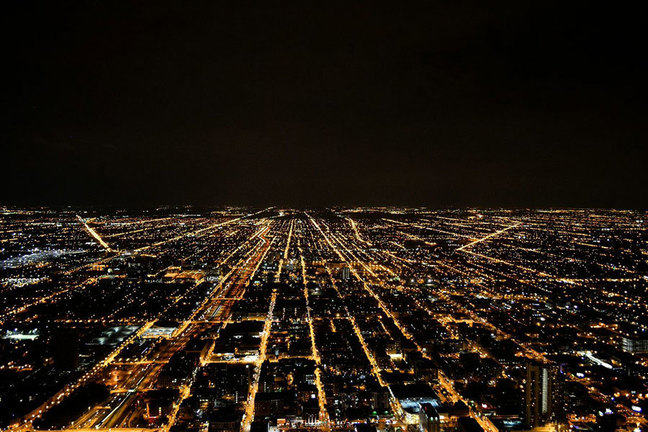 Can history be the story of different stories?

In Anneli Ekblom’s video we learn that in trying to find solutions in regards to climate change we should avoid looking at history as a linear process, and she talks about how grand historical narratives might make current development seem like an inevitable outcome. In the two following activities we will take a look at a grand narrative that is becoming more and more influential - the idea that humans are now the primary driver of change in the earth system - and ask ourselves if a narrative like that can be made to include many different stories.

Are the impacts by human life on the earth systems on such a scale that humanity itself should be named as the prime characteristic of present times? The term anthropocene was introduced by Eugen F. Stormer and Paul Crutzen about 16 years ago as a way of describing humanities increased impact on the planet [1]. The term has since been widely spread, receiving more than 28 000 hits on google scholar, and it is currently discussed if it should be adapted as the official geological term of current times.[2] The primary arguments behind this are the assumption that human impacts will leave visible traces in the sediments of the earth, impacts that can be summarised as: 1. Nuclear weapons 2. Fossil fuels. 3. New materials. 4. Changed geology. 5. Fertilisers. 6. Global warming. 7. Mass extinctions. [3]

But when did the anthropocene start? A popular suggestion is at the start of a process called the great acceleration 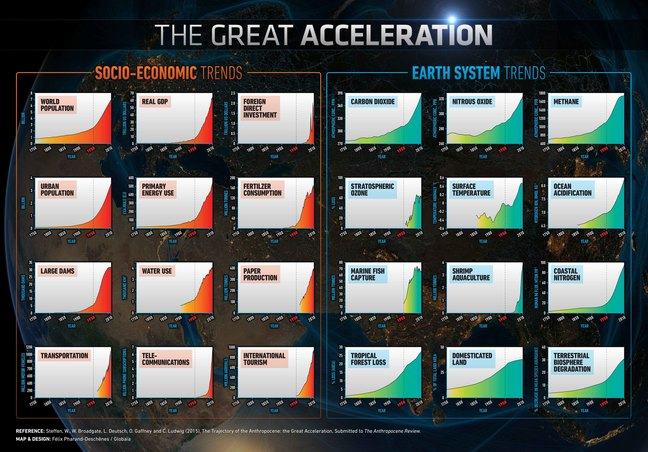 If you look carefully at the graphs above you can see that human induced CO2 emissions rose steadily from the 1850s. This increase was made possible by the transition from endosomatic (from within bodies, eg. humans and livestock) to exosomatic energy (from things outside of bodies, eg. water, wind and fossil fuels). Fossil fuels changed the way that humans consumed energy, beeing possible to transport and store and at the same time unlocking solar energy that had been gathered for thousand of years. One way to understand this compression is through Jeffrey S. Dukes estimation that

a single litre of petrol used today needed about twenty-five metric tons of ancient marine life as precursor material and organic matter equivalent to all the plant and animal life produced over the entire earth for four hundred years was required to produce the fossil fuels we burn today in a single year.[4]

But even when accounting for the steady rise after of energy use during the 19th century, something extraordinary happened in the 1950s. While both world wars, despite the mobilisation in terms of armies, naval and airborne, were carried out without major increase in use of oil, the 1950s marks the start of a rapid increase that scientists later have come to call the great acceleration. As you can see in the graph this acceleration did not only concern fossil fuels but every indicator shows a dramatic rise: Human population increased from 3 to 6 billion in 50 years, the combined economic activity increased 15 fold during the same period, loss of tropical rain forests increased roughly 300% between 1950 and 2000 and the world entered its sixth great extinction. [5]

Look at this talk by Will Steffen to learn more about the anthropocene and the great acceleration.

When looking at the graphs above there is one important thing that doesn’t show - the indicators only represents the lives of a minority of mankind. The great acceleration from the 19th century also marked the start of a new trend - the great divergence.

The creation of industrial clusters shaped the world into relations between centers and peripherys, were the peripherys produced raw materials and the centers produced refined products. This process is sometimes called unequal trade - the unequal trade being understood as “(1) the appropriation of ‘negative entropy’ (accessible, high- quality energy and materials) from elsewhere and (2) the displacement of entropy (energetic and material disorder) elsewhere.”[6] For example, looking at value of total exports Western Europe exports 8.7 times the amount of Africa in 1913 and 16.1 times in 1998.[7] And when looking at the emission of CO2

as of 2008, the advanced capitalist countries or the ‘North’ composed 18.8% of the world population, but were responsible for 72.7 of the CO2 emitted since 1850, subnational inequalities uncounted. In the early 21st century, the poorest 45% of the human population accounted for 7% of emissions, while the richest 7% produced 50%; a single average US citizen – national class divisions again disregarded – emitted as much as upwards of 500 citizens of Ethiopia, Chad, Afghanistan, Mali, Cambodia or Burundi (Roberts and Parks, 2007).[8]

When looking at the grand narratives of history it’s important to remember that they contain many different stories, all whom are equally important if we want to be able to learn. In the following discussion, we will look at the concept of slow violence and think more about history as a means of climate change communication.

Explore the principles of sustainability and understand how to create more sustainable logistics and procurement practices.