This content is taken from the University of Groningen's online course, Decision Making in a Complex and Uncertain World. Join the course to learn more.
View course
4.7

Competitive ability is an important determinant of success in virtually all organisms, including humans. Individuals therefore invest in characteristics that enhance their “competitiveness,” the ability to acquire resources in competition with others. Examples for such characteristics are weapons that provide an advantage in fights; sensory organs that improve the ability to detect and locate resources; an attractive appearance that increases the chances on the mating market; or, in humans, a good education that improves the position on the labour market. All these characteristics are costly to produce. Therefore the question arises: what is the optimal level of competitiveness?

A simple model for this question illustrates the potential complexity of the dynamics of evolution. The model makes one crucial assumption: a higher investment in competitiveness increases the probability to acquire a high-quality resource but at the same time reduces the ability to exploit the acquired resource with maximal efficiency. This assumption is plausible. For example, a tree investing in a high stem outgrows its competitor and achieves a better position when competing for light, but much of the resulting gain in energy is required for the maintenance of the stem. 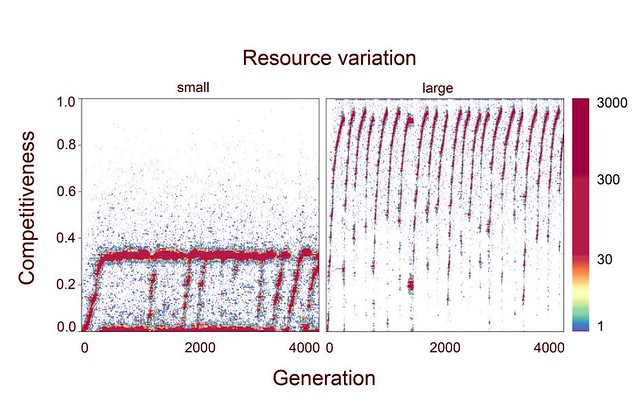 Figure: Individual-based simulations of the evolution of competitiveness, the ability to acquire high-quality resources in competition with others.