This content is taken from the University of Groningen's online course, Decision Making in a Complex and Uncertain World. Join the course to learn more.
View course
4.14

Why having more information or more strategic options may be harmful

In the lecture, we have seen that decision-making in a social context (where the outcome is not only dependent on own choices but also on the choices of others) can have surprising and sometimes counter-intuitive features. Here we briefly discuss one of these features.

This is not necessarily the case if decisions are being made in the context of social interactions: an enlarged game (with more information and/or options) may have a worse outcome for several or all participants than the original game. A simple illustration is the Prisoner’s Dilemma game that was discussed in the lecture. Assume that originally each player only had the option to cooperate. In this case, both players achieve the positive payoff. The dilemma arises as soon as the option ‘defect’ is added to the game. As discussed in the lecture, ‘defect’ yields a higher payoff than ‘cooperate’ under all circumstances, implying that smart players are more or less forced to choose this option. Hence, the only reasonable outcome is that both players defect, yielding them zero and, hence, less than the payoff they realized in the situation where the option ‘defect’ was not available.

This example may sound trivial, but also in real-world applications reducing one’s option set can be strategically advantageous. A drastic example is hijacking. The hijacker of an aircraft, for example, is in a stronger strategic position if his threats are more credible. The credibility of a threat may be enhanced by reducing one’s options. If, for example, a hijacker is using a ticking time bomb as a threat, this threat is most credible if the hijacker has no means whatsoever to deactivate the bomb.

The game in the figure below illustrates the potential disadvantage of being provided with additional information. It is a model for the question which of the two parents should care for the brood in situations where the benefits of biparental care are only a little bit larger than the benefits of uniparental care. For both the female and the male parent the payoffs are shown for each combination of parental behaviours. Consider first the case that both parents have to take their decision (care for the young or desert the brood) without being informed about the other parent’s behaviour. In this scenario, the female should always care for the brood, because this is her best option, irrespective of whether the male cares or deserts. Consequently, given the fact that the female cares, the male should desert. The resulting payoff is to the caring female and to the deserting male. The outcome changes completely if the male is informed about the female’s decision (and the female is aware of this fact). Notice that the male receives a higher payoff for desertion when the female cares and a higher payoff for care if the female deserts. Because of this, the female essentially chooses between the situation where she cares and the male deserts, and the situation where the male cares and she deserts. Since the latter situation is the best outcome for her, the female will desert, and the male has to respond by caring. Now the resulting payoff is to the deserting female and to the caring male. Hence, the fact that the male has more information than in the previous situation works to his disadvantage. 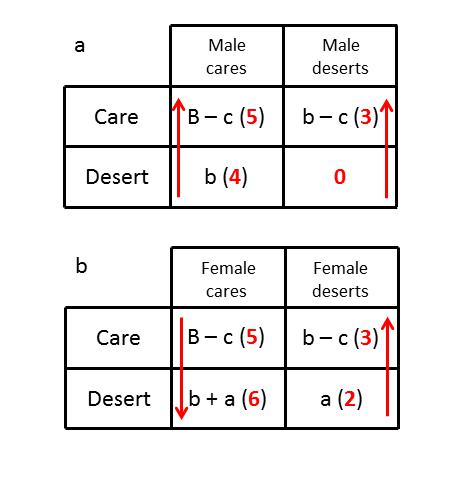 *Figure: Payoffs to the female (top) and to the male (bottom) in a parental care game where both parents have the choice between caring for their young and deserting the nest. B represents the benefit of biparental care, b the benefit of uniparental care, c the cost of providing care, and a the fitness accrued through additional matings. We assume that B>b>c and B<2b (uniparental care provides more benefit per invested effort than biparental care). Digits in red correspond to B=6, b=4, c=1, a=2. Arrows point in the direction of the favoured option.