Economist and Nobel laureate Paul Krugman is also a columnist for the American daily newspaper The New York Times. In his column, “The Conscience of a Liberal”, he writes abouteconomic and political issues. A recurrent theme is economic geography. Take a look at two of his blogs on this topic published in October and December 2013.

In the first blog, “Agglomerating a Revolution”, Krugman discusses the work of two prominent economic historians, Nicholas Crafts and Nikolaus Wolf. Crafts and Wolf argue that the traditional concentration of cotton industry in Lancashire, Britain, did not necessarily reflect particular regional characteristics favourable to textile production that could not be found elsewhere. Instead, the concentration of industry resulted from the potential rewards of external economies. Once (for whatever reason) a cotton industry was set up in Lancashire, it was irrational for cotton producers to settle elsewhere, as this would deny them the benefits of positive externalities conveyed by having other cotton producers in the nearby vicinity. New firms can instantly use, for instance, the infrastructures already built by others, the large supply of labor and expertise attracted by the concentration of industry, the forward and backward linkages provided by other firms that are necessary to acquire intermediate inputs and to sell the produce.

Krugman’s parting shot is particularly relevant: “… it’s interesting to at least contemplate the possibility that but for the accidents of history, cotton cloth might have been made by the banks of the Tagus rather than in the region of the Mersey”. Indeed, if a center of cotton industry was not ‘accidentally’ set up first in Lancashire but in Lisbon, external economies would have led to a subsequent concentration of manufacturing activity in the latter area. The bottom line of the second blog is quite similar. Agglomeration economies, which give an advantage to firms or people who locate close to other firms or people, tend to lock in urban or manufacturing locations. Externalities may lead to path dependence.

Krugman highlights these studies on path dependence and location in his blog because he himself has studied the issue intensively. In an article written in 1991 he tries to explain the persistence of the concentration of U.S. manufacturing in a relatively small part of the Northeast and the eastern part of the Midwest. This manufacturing belt was shaped in the second half of the 19th century, before the rapid development and settlement of the far West. Surprisingly, manufacturing activity remained centered in the manufacturing belt afterward, even when new land in the West was exploited. To illustrate, in the 1950s it still housed 64 percent of total U.S. manufacturing employment. Krugman even went so far as to state that it contained “…virtually all manufacturing that did not need either to be close to the consumer or close to specific natural resources.” (Krugman, “History and Industry Location”, The American Economic Review, Vol..81, No. 2 (1991) p. 80) How can we explain the persistence of the manufacturing belt?

As with the studies Krugman discussed in his blogs, the key mechanism that leads to the lock-in of manufacturing activity in one location revolves around external economies. Take a look at the graph. Suppose we have an economy with two manufacturing locations; an old one (the manufacturing belt) and one with new industrial activities. Suppose also that both areas have external economies, i.e. the return to any one industry for participating in a location depends positively on the number of total industries already active in that location. Therefore, the rates-of-return lines in both locations are upward sloping. We can see that the rate-of-return line in the new location is more favourable than in the old location; whenever both locations have the same number of firms the return is highest in the new location. 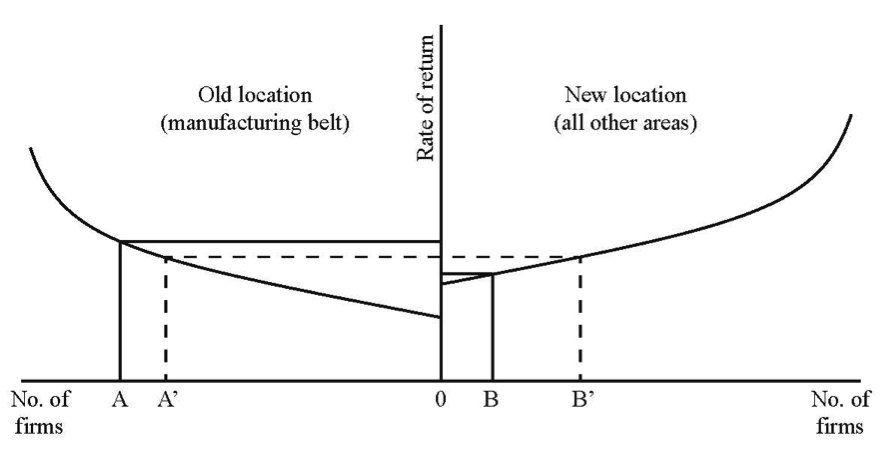 On the basis of this concept Krugman explained the emergence, initial advantage and lock-in of the manufacturing belt in the U.S. in the second half of the 19th century : “…Even though new land and new resources were exploited to the West and even though slavery ended, for three-quarters of a century the pull of the established manufactured areas was strong enough to keep the manufacturing core virtually intact.” (Krugman, “History and Industry Location”, p. 82) This is a very clear example of path dependence in history.

The lock-in of manufacturing activity on one location is comparable to the lock-in of technology discussed in the lecture and is a concrete example of the lock-in concept from Week 2. In both cases, choices made previously influence the choices made presently, even if the circumstances of the past do not seem relevant today. For instance, the concentration of cotton mills in Lancashire resulted initially from an ample supply of water, which provided the primary source of power until the second half of the 19th century. Afterward, however, cotton industry remained centred around Lancashire, even though the introduction of the steam engine made possible the production of cotton on locations without access to water. Clearly, a path-dependent process evolves as a consequence of its own history, through positive feedback mechanisms. It results in a self-reinforcing pattern of development, a process which is further stimulated by uncertainty. People like doing things the way we know, out of uncertainty about the costs of alternatives.

It seems almost impossible to escape from these self-reinforcing development patterns. But, in theory, there is always the possibility to switch from ‘old’ to ‘new’, be it production locations, urban locations or technologies. This possibility is created by expectations. Once someone for whatever reason believes that everybody else will switch to ‘new’ today or tomorrow, he or she will do so as well. In practice, however, such transitions take time and a collective switch is difficult to coordinate. As a result, people or firms prefer to wait until others have made the switch and go over themselves only once the others have created enough critical mass to equal the rate of return in ‘old’.

But in some cases, first-mover advantages make people gravitate toward ‘new’ even if the rate of return is lower than in ‘old’. Going first may result in economic losses in the short run, but could lead to substantial gains in the long run. In terms of location, for instance, moving first may offer a better choice of houses or factories, which in the long run reduces the economic losses suffered as a result of traffic congestion that will inevitably occur when others make the switch, too. Similarly, adopting a new technology at an early stage may be inefficient in the short run due to a lack of external economies, but could still be deemed desirable when it enables a firm to capture a large share of a new market.