This content is taken from the Coventry University's online course, Strategy as a Process and Measures of Success: An Introduction. Join the course to learn more.
View course
2.3

Strategy as a Process and Measures of...

Economies of scale arises when a greater quantity of production lowers the average cost per unit because fixed costs (like rent, wages and utilities) remain the same. In other words, organisations outperform their competitors by manufacturing or delivering greater quantities of value using the same resources.

In the table below, notice how the cost per unit in the last row decreases over time even though variable cost (the price of raw materials) and total cost are on the rise.

How is the cost per unit calculated? The formula is total cost/unit of production in the respective columns. On its own, total cost is determined by adding up fixed costs and variable costs.

On the other hand, economies of scope is realised from producing a variety of products that share the same resources, such as warehousing, distribution network or people.

Cost is saved because the same resources are used to deliver different products.

For example, through a single platform amazon.com, Amazon sell their own as well as third-party products, digital services (Amazon Music and Prime Video), financial services (Mastercard), payment solution (Amazon Pay) and a lot more while capturing the purchasing habits of customers to personalise the platform. Doing this better than other online retailers bestows a cost advantage over its competitors.

The benefit of possessing a cost advantage is twofold:

In the first scenario, when the organisation lowers its price (penetration pricing), it seeks profit from a higher volume of sales because the quality of its product is equivalent to competitors. Therefore, in theory, customers make purchasing decisions solely on price and not on quality. See the example in the image below: 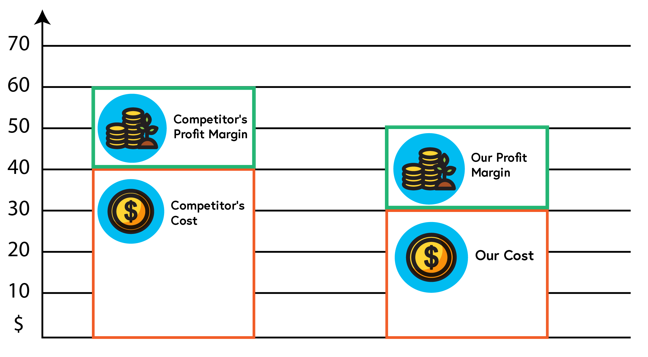 The key difference here is the lower cost-base of $30 in the second column compared to $40 in the first column. This scenario may seem trivial but in industries with undifferentiated products like salt, sugar, cement, electricity etc., this may determine being in business or going bust.

Another example is budget air travel where Ryanair in the UK and Southwest Airlines in the US have perfected the art of low-cost and wafer-thin margins. For most people, especially on short-haul routes, air travel is an undifferentiated product so passengers make logical purchase decisions and are price-sensitive. It is no surprise that several airlines have recently gone out of business for their inability to compete on cost and therefore price.

In the second scenario, the firm may choose to maintain the same price as its competitors and benefit from a wider profit margin. See the image below: 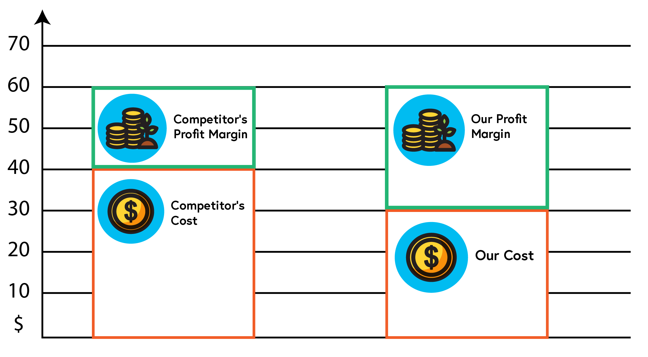 Once more, the key difference here is the lower cost-base of $30 in the second column compared to $40 in the first column, and our ability to match competitors’ price without losing customers means we will be a more profitable firm over time.

It is typical for managers to express profit margins as a percentage. To do this, the formula is profit/selling price x 100. For example, in the first column above, the competitors profit margin in percentage will be:

Similarly, in the second column above, our profit margin in percentage will be:

What does this mean?

It simply indicates how much money is available to be reinvested in the business or to be paid out to shareholders over a period of time. The higher the percentage, the more efficient the business is deemed to be in comparison to rivals. Firms with the lowest cost-base and high profit margins in the industry are referred to as ‘cost leaders’.

Can you think of cost leaders in fashion, food, consumer banking, retail, hospitality and other industries? Discuss in the forum.