This content is taken from the Coventry University's online course, Research for Construction Management. Join the course to learn more.
View course
2.4 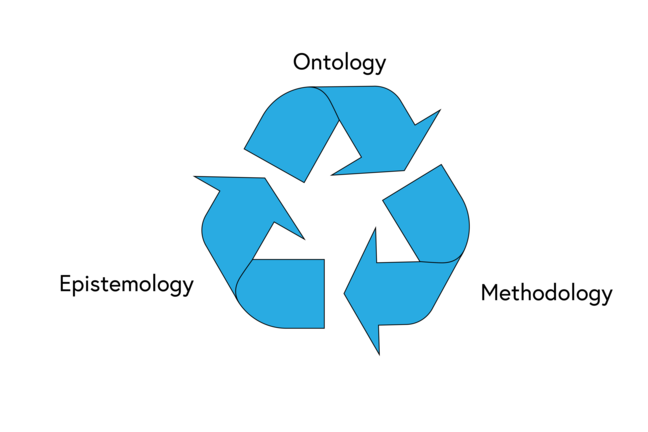 The three elements of a paradigm

Let’s explore how ontology, epistemology and methodology can link together to form the paradigm of your research strategy.

Ontology is defined as the conception of reality, and in the broader sense is concerned with the question of existence.

A researcher’s ontological positions can be objective or constructive.

… an ontological position that asserts that social phenomena and their meanings have an existence that is independent of social actors.

Epistemology is concerned with assumptions about human knowledge, particularly the acceptable knowledge in a discipline. These assumptions shape how we understand our research questions, the methods that we will use to investigate the research question, collect data, analyse and interpret data. In other words, the specification of the ontological stance is a prerequisite for the choice of the epistemological standpoint which, in turn, shapes the research methodology that is going to be adopted (Grix 2001).

An important feature in a research project is to have a clear methodological position for your study. This means identifying what approach the research will take.

Many researchers have defined the term ‘methodology’. Hart (1998: 28) defines methodology as:

… a system of methods and rules to facilitate the collection and analysis of data. It provides the starting point for choosing an approach made up of theories, ideas, concepts and definitions of the topic; therefore, providing the basis of a critical activity consisting of making choices about the nature and character of the social world.

The term ‘methodology’ should not be confused with the term ‘method’. Research methods are the techniques that apply the methodology. A research method is simply a technique for data collection involving specific instruments, such as a self-completed questionnaire, documentary archives, a structured interview schedule, or participant observation where the researcher listens to and watches others. A research method answers the ‘how’ questions on data collection and analysis. In other words, how could the research problem be investigated and how will the data (information) collected be analysed? We will be looking at research methods in more detail later this week.

Linking the three elements of a paradigm

As argued by Knight and Turnbull (2008), a researcher needs to have a clear ontological and epistemological stance for their research, and understand fully the knowledge in their field of study and how it is acquired. The two examples in this table highlight the links between ontology, epistemology and methodology.

These philosophical foundations must be reviewed when arriving at a decision for research methodology, which in turn influences the research method (Knight and Ruddock 2008). We should not discuss methodology in isolation without knowledge of both the ontological and the epistemological stance of the researcher.

Now that you have learned about the different philosophies in research, what do you think the philosophical structure and direction of your enquiry might be for the draft proposal you are working on?

What is the ontological and epistemological stance of your research?

Dainty, A. (2008) ‘Methodological Pluralism in Construction Management’, in Advanced Research Methods in the Built Environment. ed. by Knight, A. and Ruddock, L. Oxford: Wiley Blackwell, 1-12