Culture is a complex social phenomenon that, over the years, has attracted a wide range of definitions.

Consider the following definition offered by Ogbonna and Harris (2002: 34), who say culture is:

The collective sum of beliefs, values, meanings and assumptions that are shared by a social group and that help to shape the ways in which they respond to each other and their external environment.

This definition can be applied to every aspect of our personal and professional lives.

At a personal level, consider how you would describe your family’s culture or the culture of a social group that you’re a part of, such as a sports team or interest group.

At a professional level, you might engage with not just an overall organisational culture but also with different subcultures depending on the size and structure of that organisation. How one team operates (in terms of their behaviours and actions) will be different from another.

You then have the role of national cultures, which will influence (to varying degrees) how personal and professional cultures play out (we’ll explore this more in the next step).

Schein (2004) developed a framework as a way of thinking about organisational culture on three levels. These include:

The latter two levels are more formal and tangible aspects of a culture. 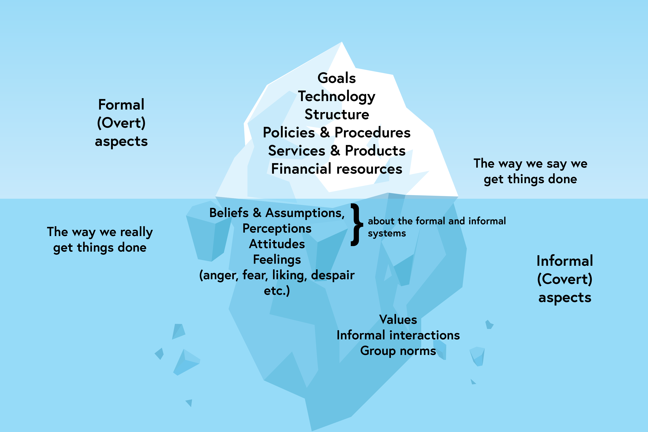 Select image to expand the size.

Here, you can see the distinction between the formal and informal aspects of a culture.

Consider and share your responses to the following questions: