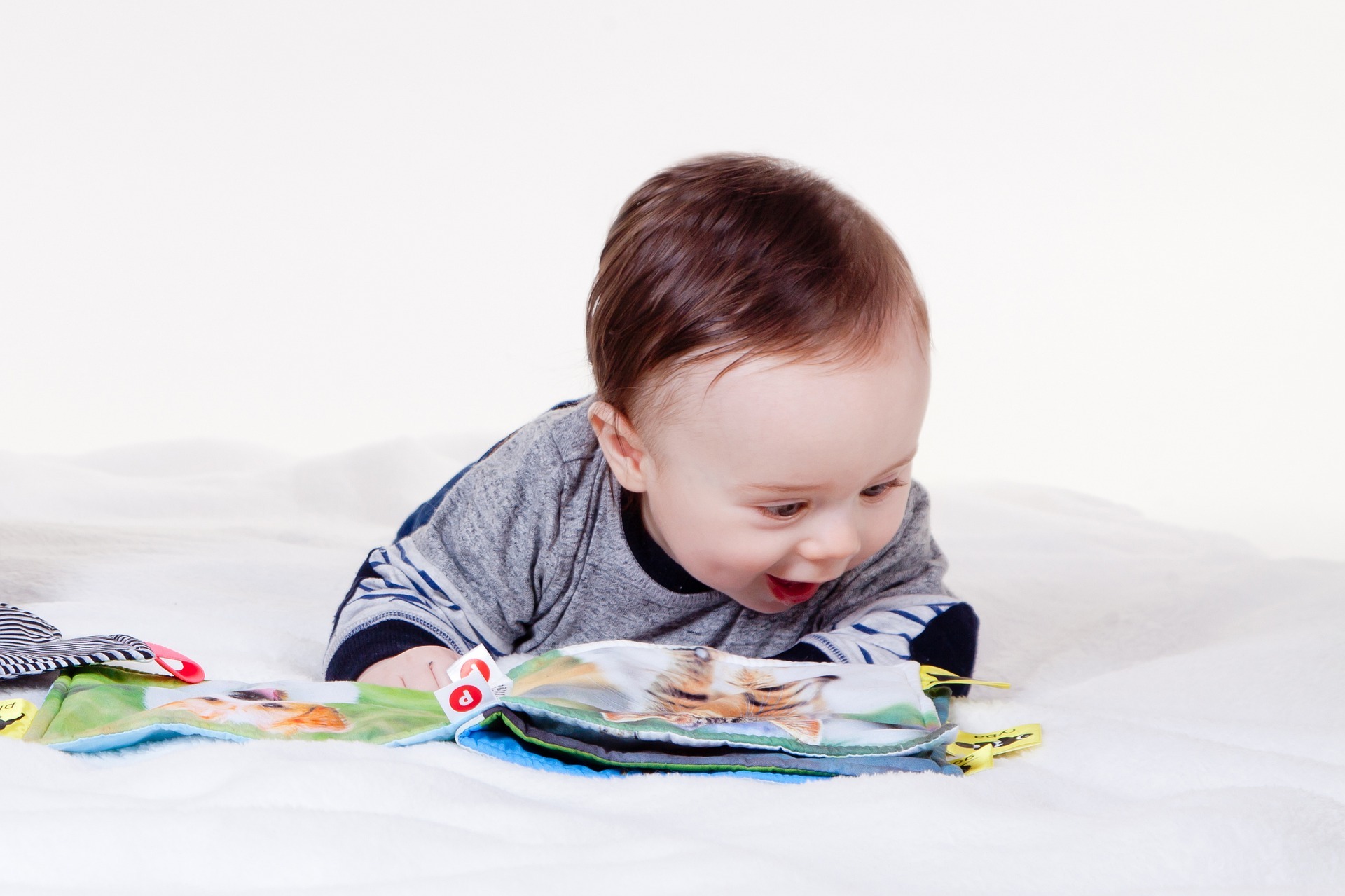 Being emotionally available to children requires being able to understand their perspective and abilities. It was not until the mid-1900s that scientists even had an understanding of how children’s minds changed as they grew, and prior to this time, were assumed to think about the world as an adult would. We know now that children’s abilities to process and understand information changes substantially as their brain develops. Jean Piaget was a developmental psychologist who studied children’s minds, and his ideas have been foundational to our understanding of how they think. His theory was that children go through four stages of understanding their world that are age-related, and these stages are not a matter of how much children learn, but how they process information. Children do not abruptly move through these stages, so the general age range in which they move through them varies for each child.Sensorimotor Stage (ages birth until about 2 years): Children initially learn about their world by coordinating how their physical actions (e.g., eating), relate to their senses (e.g., taste). Infants live in the present, meaning that what is out of sight is out of mind. By about 2 years old, children can start to think symbolically. For example, if they drop a stuffed animal, very young children will not yet understand that the animal still exists. Over time, the child develops symbolic thought and understands that the animal is still there, even if they cannot see it (a term called object permanence). Older children will look for the dropped object because they know it exists, while younger children will not. Children at this age also experience stranger anxiety; they trust the caregivers they are attached to and become afraid when they meet someone new.Preoperational Stage (ages 2-7 years): Children in this stage have more symbolic than sensorimotor thought–they start to understand their world in the form of words, drawings, and images. Their cognitive abilities are still very limited, however. Children in this stage are unable to perform operations, meaning that they are not able to reverse orders of events. For example, imagine you have three different glasses, one taller and thinner in shape, the other two short and stout. If you fill the two short and stout glasses with equal amounts of water and ask a child which glass has more water in it, they will say they have the same. If you pour the water from one into the taller and thinner glass and ask the child the same question, they will say the taller glass has more water in it. The preoperational child cannot reverse the action, while an older child will know that the amount of water does not change. Scientists call this ability conservation because older children understand that properties of objects, like volume, don’t change even if they appear to superficially.Children who are in the preoperational stage are also very egocentric, meaning that they are unable to understand that other people have different perspectives. Many parents become frustrated with children when they argue with siblings, assuming that the child should understand the other’s perspective. It is important to remember that they are cognitively incapable of doing this fully at this age. It takes time for them to learn that other people have motives and intentions, just like them. Children also think intuitively at this stage, meaning that they do not understand how they draw conclusions, and are often very sure they know things, even if their knowledge was due to illogical reasoning.Concrete Operational Stage (7-11 years): This stage of cognitive development entails the ability to use operations and logical thinking in very concrete situations. Concrete situations are those that are bound by immediate physical reality such as shape, time, and space. Children of this age have a hard time thinking abstractly, but they are generally pretty good at classifying and ordering objects and people. For example, they are able to understand for to categorize family members by role, age, and other features.Formal Operational Stage (11-15 years through adulthood): This stage of thinking involves more abstract, logical, and idealistic thought. The individual is now able to think hypothetically about possibilities (If this, then that), and is more logical in understanding not only how things work, but how things might appear from multiple perspectives. thinking. Adolescents are still quite egotistical because even though they may see other’s perspectives better, they assume that their own thoughts are equally interesting to others. Importantly, not all teenagers or even adults ever develop full formal operational thought.

This content is taken from
Colorado State University online course,

View Course
Now that we have learned about the different stages, let’s see how children of different ages will interpret the same family event.
© Colorado State University

This content is taken from Colorado State University online course

Hi there! We hope you're enjoying our article: Cognitive Development in Children
This article is part of our course: Positive Parenting After Separation